The latest release of WebOffice in version 10.8 is now available! With this release, the Flex client gains additional functions such as editing, which were previously limited to the Mobile client. The replacement of the Mobile client by the Flex Client is now completed - making this the ideal time for a migration to the Flex Client. Other highlights of the current release include significant improvements and enhancements in the support of OGC-compliant services such as WMS or WMTS. Concerning usability, numerous customer requests have been considered.

Flex client provides all the features of the Mobile client

The interface for small mobile devices like mobile phones of the WebOffice Flex client was already introduced as a BETA version in WebOffice 10.6. With WebOffice 10.8, the Flex client now includes all important Mobile client features such as editing functionality. This means all use-cases supported by the Mobile client can now be realized with flex. It’s time to plan the transition of your Mobile projects! More information on how to exchange your mobile client license for a Flex client license can be found in our announcement "WebOffice Flex Client will replace the Mobile Client".

The integration of OGC-compliant services such as WMS or WMTS have long been possible in WebOffice. In this area further significant improvements have been made in the integration of these services: With WebOffice 10.8 it is now possible to control in detail which layers, under which name, in which order are visible in the Table of Contents and can be queried in the map.

Improved usability and new functions on all levels

The customer wishes of WebOffice Ideas are taken into consideration carefully and so small but partly significant changes were implemented on the whole product range: For example, the Label Feature texts can now be adjusted, rotated and edited after initial creation. Additionally there is a new option to scale the texts corresponding to thescale. Print Series and Index Plot is now also available for VertiGIS Printing Tools. In addition functionality of Net Trace or the Self Registration Form in UserManagement were also further improved.

You can read about all new features in our WebOffice documentation or check out our webinar. WebOffice 10.8 is the first release package published by VertiGIS GmbH. 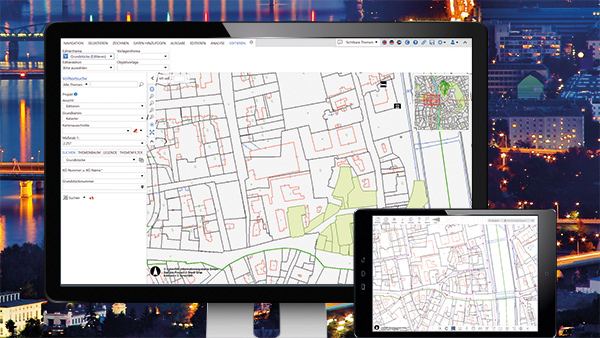 Screenshot: Editing in the flex client